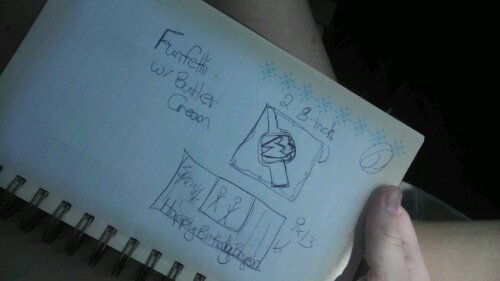 We are on our way to Silver City, Michigan to have a nice weekend away with the adults in my family and what am I doing? Planning out the two cakes that people ordered from me that ate both due next weekend. That’s right. We dropped the kids off at my Aunts house and picked up my sister-in-law and started driving. My brother is ahead of and enjoying the outdoors on his motorcyle. And I’m riding in the mighty Buick, jamming out Vincent Gill (totally aging myself there), and designing a Hawaiian/Liau cake and, wait for it, a WWE Wresting cake. That’s what I get for agreeing to do a 10 year old birthday cake! Either way, I love the experience and practice. Pictures will be coming when I’m done with then along with all the other cakes I’ve decorated over the past few weeks. July has been a crazy month. Lots to do, places to go, and cakes to make. I hope you are all having a great summer. Enjoy it while it lasts 🙂 God Bless! -karen

Since making my healthy chocolate chip cookies, I’ve also made some also delicious, but filled with a few more calories, than the chickpea cookies. It’s a little recipe I found on Pinterest, but was originally from here. I made these for a girls night and there were a hit! I will tell you right off, if you are looking for something healthy..this it NOT it. But boy are these good!

One great about these is they are easy to whip up and you don’t have to drizzle with chocolate. They are good plain or you could dip them in chocolate as well. Either way, they are delicious and you need to try them out.

Warning: These cookie dough bites are very addictive and you will not want to stop eating them.

Disclaimer: I am not responsible for any ‘unexplained weight gain’ after you make these 🙂 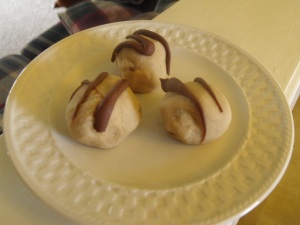 1 cup (2 sticks) salted butter, softened
1 1/2 cups light brown sugar, packed
1 tsp vanilla
2 cups flour (I used whole wheat pasty flour, because it’s what I keep on hand, but you could use all purpose or any type of normal baking flour, I’m sure)
6oz chocolate chips (I used milk chocolate. You could use mini, dark chocolate, or any other flavor you’d like)

Directions:
Cream butter and sugar together. Add the vanilla and flour and mix well. You can use your hands if it gets to be tough to stir. (I didn’t, but you could use a stand mixer as well) Fold in the chocolate chips.

Line a  cookie sheet with parchment paper or wax paper (I do this for easy clean up). Roll the dough into approximately 1 inch balls and place on cookies sheet. Place in freezer for about 15 minutes or in the fridge for about 30 minutes, or until they are not sticky anymore.

If you want to add the drizzled chocolate, just melt some extra chocolate chips and go at it! 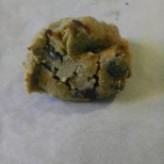 I know what you’re thinking. Chickpeas…in a cookie. That sounds gross. Well, let me tell you, it is ANYTHING but gross. It is amazing! If you are looking for a healthy alternative to your favorite cookie in the whole world, your search stops here.

Now, don’t get me wrong. These don’t taste exactly the same the buttery, sugar-filled deliciousness of normal chocolate chip cookies. But, these are clean and gluten free, and packed with protein, thanks to the beans. It’s kind of like eating a ball of dough every time you eat one. They’re pretty great.

My hubby was not as convinced. He thinks that anything with beans in it is automatically gross. Well, he can just eat the sugary cookies and get over it…wait, I rarely make them anymore…lol

Also, a big shout out to Janelle for letting me borrow her food processor! Thanks Friend!!!!

1 can chickpeas, drained and rinsed

1/2 cup nut butter (I used my DIY Almond Butter, but you can use peanut butter too)

Preheat oven to 350 degrees. In a food processor, combine all ingredients except the chocolate chips, until perfectly smooth. Either fold in the chocolate chips with a spatula, or throw them in and pulse a few times to incorporate them in all the dough. Line a baking sheet with parchment paper. Place tablespoons of dough onto cookies sheet and bake for 10-15 minutes or until the cookies are golden in color. 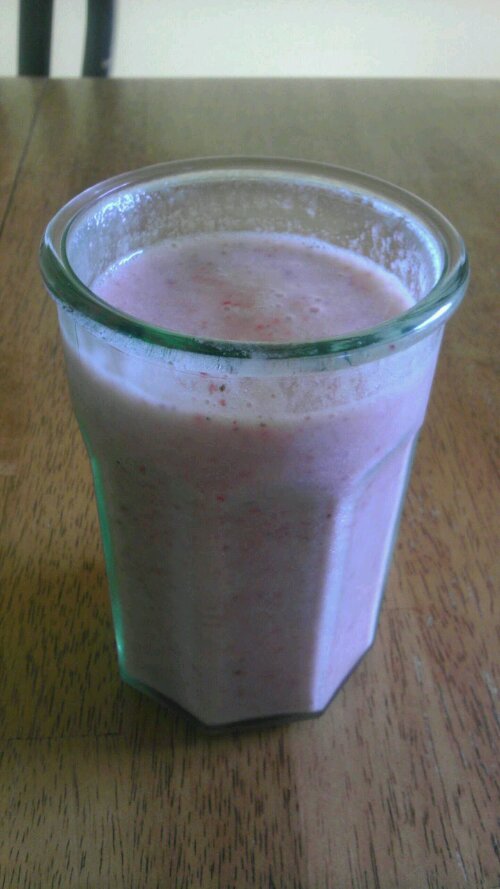 I’ve apparently been on a smoothie kick lately. I don’t know, its an easy way to get some extra fruit in for me. I’m not too great at eating the fruits and veggies. But I try. My sister, Jen,posted this one facebook for a cousin of ours and I decided to try it out this morning. Here are three reasons you should make this: 1) it’s yummy
2) its easy
3) because I said so. (just kidding…kind of)

1 cup strawberries (fresh or frozen)
1/2 cup pineapple (fresh or frozen, you could probly use canned as well)
1 banana
6-8 ice cubes
Sweetener of choice (I used one packet of Truvia, but you could also use sugar, honey or nothing, if you wanted)
1/2 cup coconut milk

Put all ingredients in blender and blend until desired consistantcy.

See, I told you it was easy.

I have been really enjoying smoothies lately. Now that I’ve found an easy recipe that I always have the ingredients for, I have one of these almost every day. Seriously. I feel like a lot of smoothie’s I come across (mostly on Pinterest) have weird ingredients in them like kale or spinach, which, let’s be honest, still kinda freaks me out. That stuff is meant for salads. But, maybe one of these days I’ll give it a try and love it. For now, I’ll stick with what I know.

The other thing I really like about this smoothie is that it’s pretty versatile. You can add just about any fruit that blend well. I have been sticking to berry’s mostly, because, again, it’s what I know. (I don’t branch out much) The only ingredient that I found weird was the oatmeal. I’ve looked at other smoothie recipes with oatmeal in them and thought it was the weirdest thing and that it would give it an odd texture. But, I gave it a shot and it’s delish! You can’t even tell the oatmeal was in there. It just gives it a little more body. So don’t freak out when you read that it has oatmeal in it. It’s totally worth trying out before you judge it.

The original recipe used raspberries, which is truly delicious. I ran out of them very quickly, since I love raspberries so much, so I replaced with strawberries and blueberries. I have some blackberries right now and I will be trying that out soon too! Possibly today 🙂 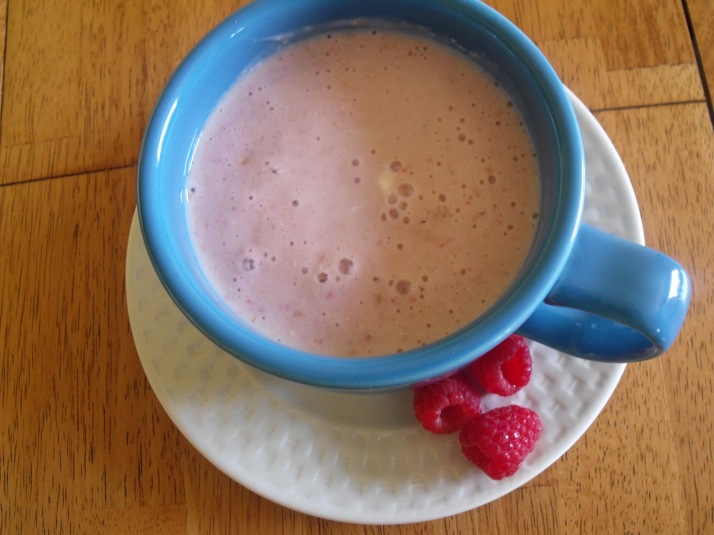 1 cup milk (I’ve been using almond milk or coconut milk. You could also use white milk)

Add ice and berries to the bottom of the blender, then add the other ingredients on top. Blend until smooth.

*Note: I generally only make half the recipe when I make it for breakfast. I freeze the other half of the banana to use the next day. I do suggest slicing the banana before freezing, because I think it blend better that way. I make mine in my Magic Bullet so I don’t have the blender to wash every day.